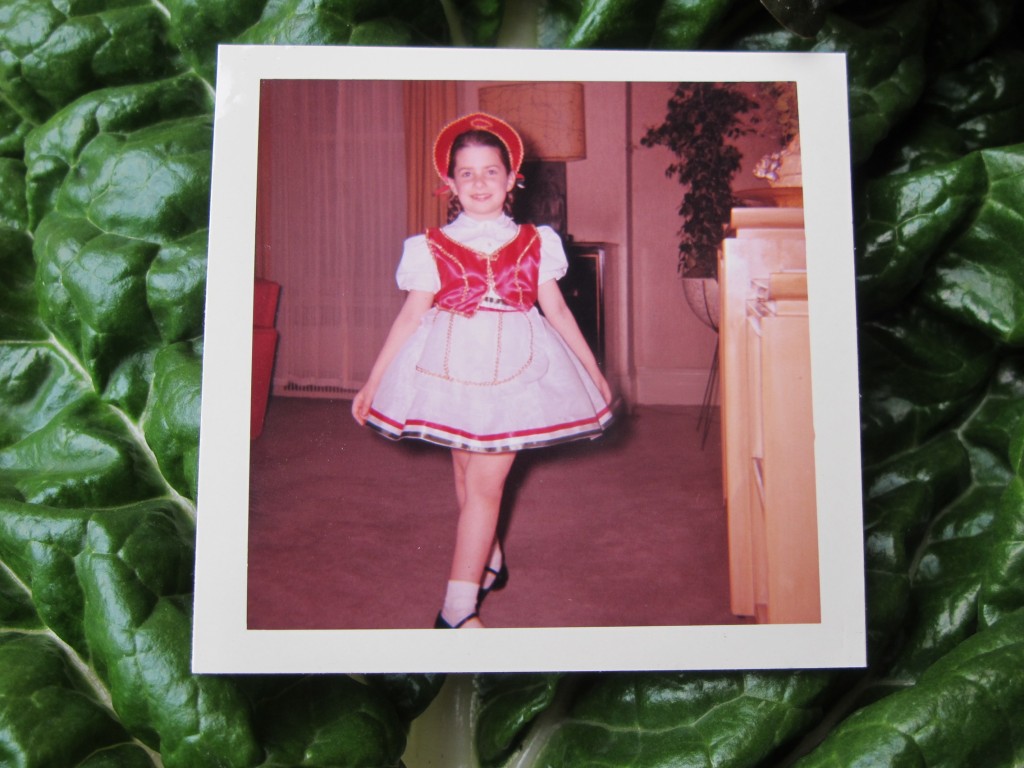 Youthful Csardas dancer among the chard

Csardas  /ˈtʃaːrdaːʃ/: My Grandmother, would sew the costume and my Mother would teach me the dance. Which came first, the inn “Csarda” or the dance “Csardas”? That philosophical question was unimportant to Hungarian expats in New York. What was important, was to find where it was possible to replicate the food of the csarda along with the atmosphere of the great coffee houses of Budapest. To many New Yorker’s the answer was Mrs Terhes, a restaurant on the upper east side of Manhattan. My Father, a good businessman to the core, had no nostalgia for a country that had first persecuted him as a Jew and then decided that his kind were anathema to the Communism. But Mother’s milk being Mother’s milk, his headlong rush to enjoy the freedom’s and the glories of New York was even greater when there were also Hungarian restaurants to enjoy. Mrs Terhes, was the place, and as a great treat my brother Rony and I would dine there with our Father. My brother’s and my favorite dish there, was creamed spinach. To this day we dream of it.

With an overflow of chard from my garden, I make vague memories of Mrs Terhes; Creamed Chard

My Polish husband loves it and when I serve it to guests they remark on its deliciousness and ask how to make it. At a dinner party, where I served the dish, it was passed and around the table everybody took a polite portion. When it landed between myself and my Hungarian friend, Stephen Alix, I noticed we spent the whole evening eating more and more of it. There is a substitute for Mother’s milk! 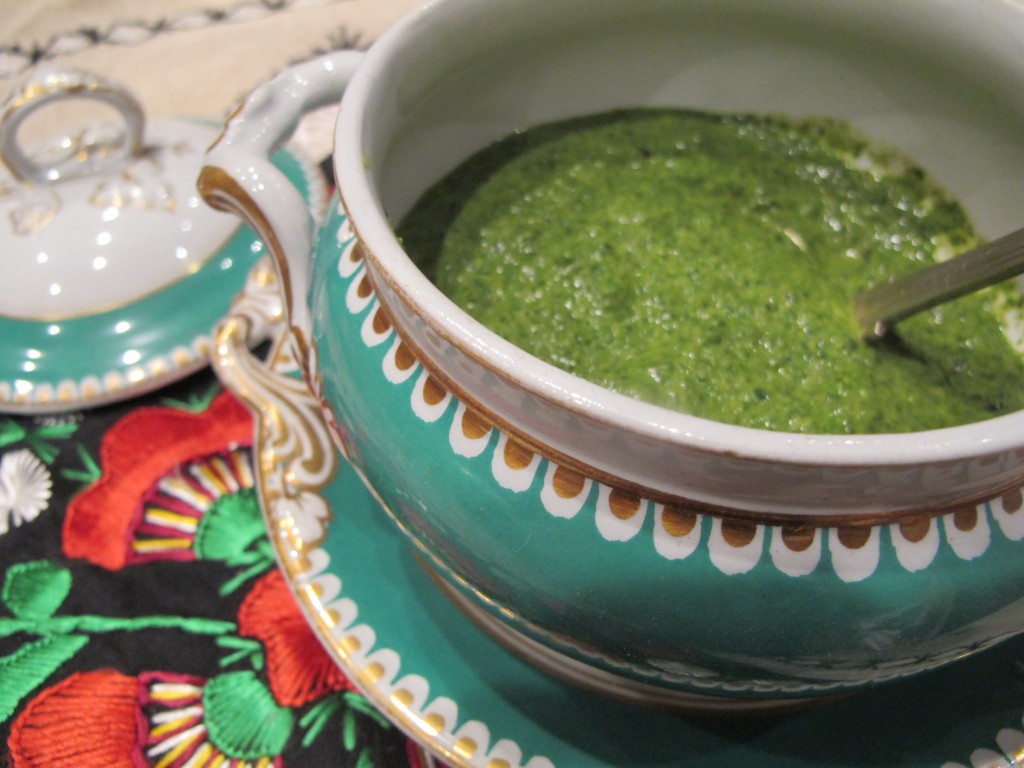 Recipe: Roughly chop chard leaves, discarding or saving the stems for another use. Steam the chard with the water clinging to the washed leaves and a little extra water for the pot. Cover the pot and occasionally stir the leaves, taking the uncooked leaves from the top to the bottom, so that all the chard has a chance to cook. When the chard is wilted and cooked but still brightly colored, drain in a colander in the sink and cool. My huge pile of chard when cooked and drained, yielded 5 loosely packed cups

While the chard is cooling, make the sauce. Melt 1/4 lb unsalted butter in a saucepan. When it is melted add 3 tablespoons flour. Over a low heat, keep stirring until the butter and the flour have amalgamated. Add some grated nutmeg and a little salt to taste. Slowly add 2 cups milk, stirring constantly until the sauce has thickened and is smooth. In this recipe, do not worry if the sauce has a few lumps in it as the blender will smooth them out. Cool.

When both the sauce and the chard have cooled, puree in batches in a blender, adding cold milk as necessary. When blended, put the puree back in the pot and cook for about an hour, more or less, until all the textures and flavors are one. Serve immediately or the creamed chard can be refrigerated and reheated. 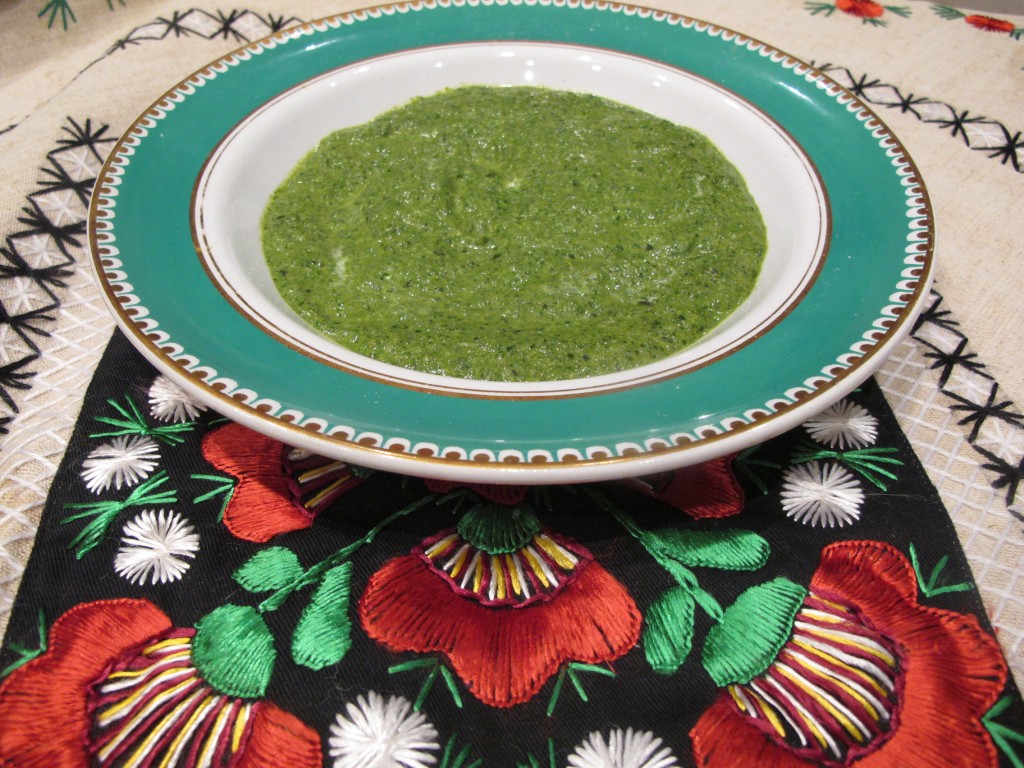