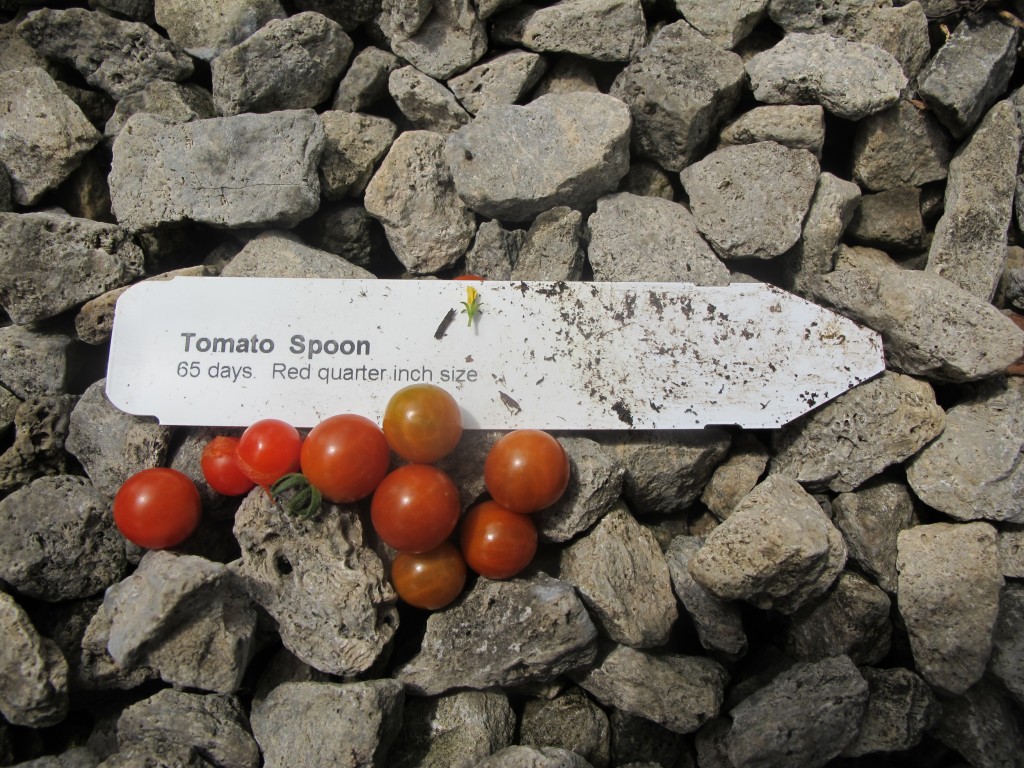 Standing in the greenhouse looking at a choice of seedlings of 200 varieties of heritage tomatoes I could grow was a thrill.This Spring having built more wooden boxes and added more colored plastic tubs to my office roof top vegetable garden I could still only accomodate about 60 varieties, accounting for multiples of  favorite ones from last year. I had poured over the printout catalogue and circled the ones  that sounding most tempting . Looking at the seedlings I switched and added varieties. To have a complete collection I needed some cherry type tomatoes even though I am not overly fond of them, too much skin to fruit ratio. A tempting variety caught my imagination, Spoon Tomatoes, tiny miniature tomatoes! Even being an avid collector of mini kitchens, toy dishes and implements I hesitated. Being more of a hunter than a gatherer , I love finding, planting and nurturing edibles ,but picking? Much too tedious!

One of the first tomatoes to ripen on the rooftop were these minis. They detached easily from the vine and I popped a few in my mouth. Zowie! With a pop and a crunch , mini explosions of concentrated tomato taste and sweetness ignited my palate. I immediately began to construct a dish to use these tomatoes.

In size, color and effect of the explosions [crunchy skins enclosing tastes] they reminded me of salmon roe. Tomato and roe ,unami tastes. I remembered a favorite dish of my husband’s of our early married years, spaghetti with caviar. It involved lots of heavy cream and butter and well as chives and grated lemon rind. For this dish, I wanted to emphasize  the difference and harmony of the earth and sea. For earthy, I picked multi grain fresh linguine, both for the color and taste. Chives, for the earth, a stand in for onions that would have been too heavy and overwhelming. For the sea, I picked bronze fennel whose fronds reminded me of seaweed and the grated lemon rind which evoked lemon groves by the sea in Italy. I used olive oil to complement the tomatoes and the richness of butter to deliver the taste of the roe.

Drain pasta and toss with butter.

On individual plates put a portion of pasta. Grate black pepper over the pasta. Strew the roe, tomatoes, fennel, chives, lemon rind in an amount both pleasing to the eye and palate. Drizzle olive oil on top. Serve, instructing guests to toss the ingredients together. 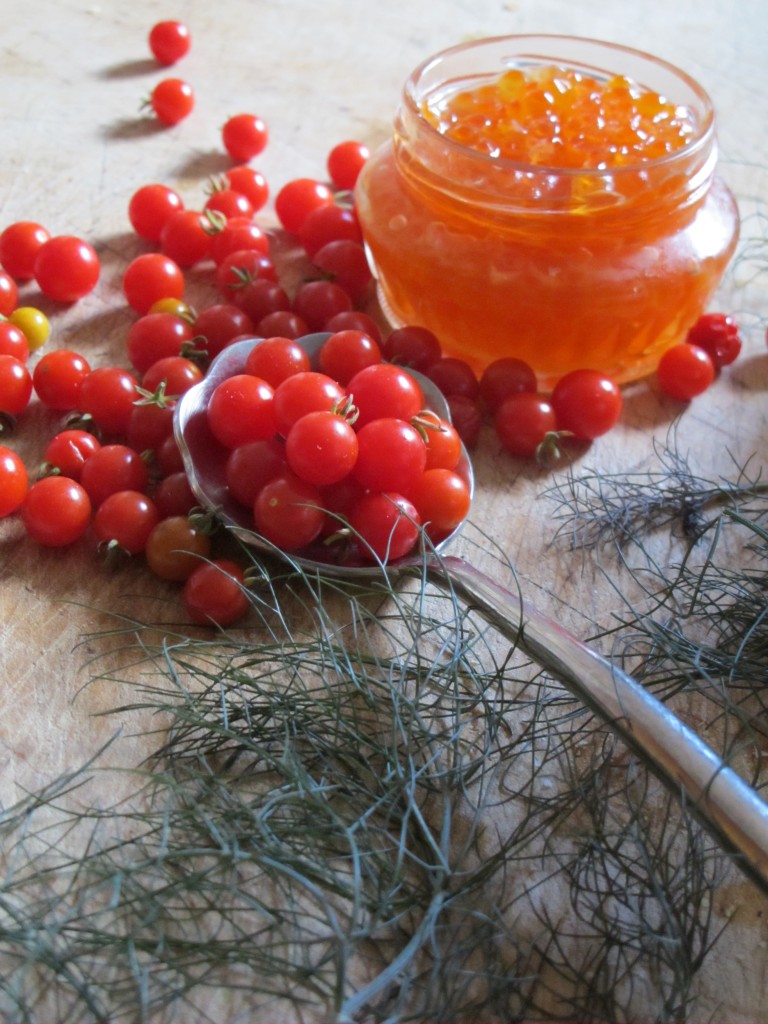 many tomatoes in a spoon 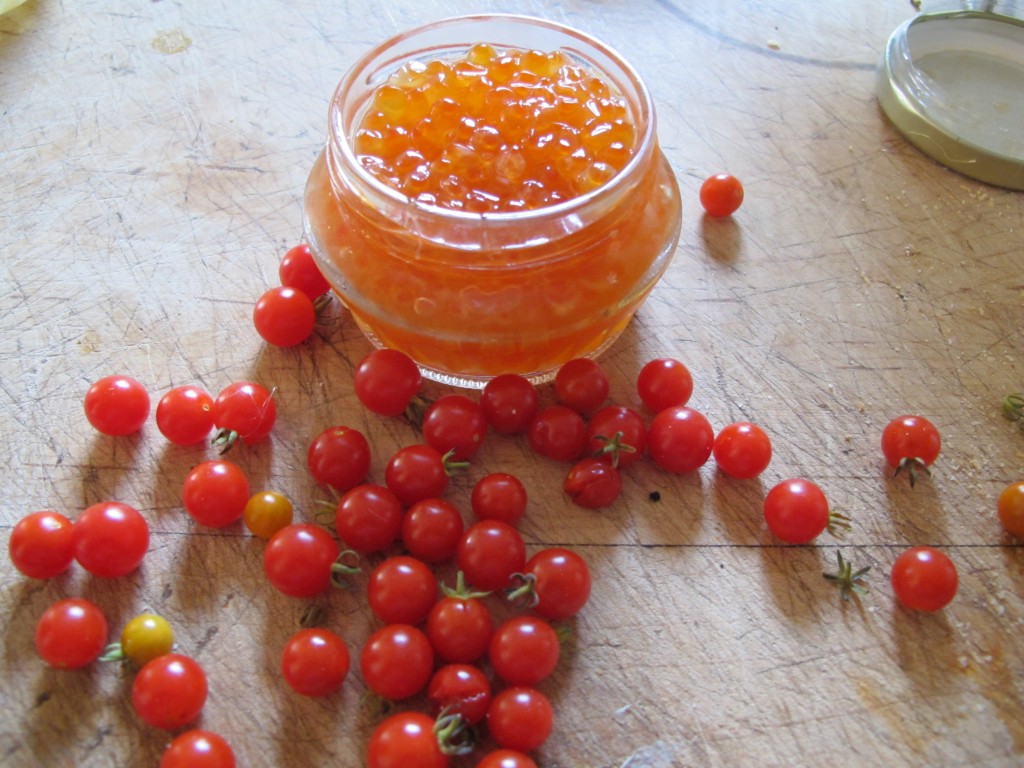 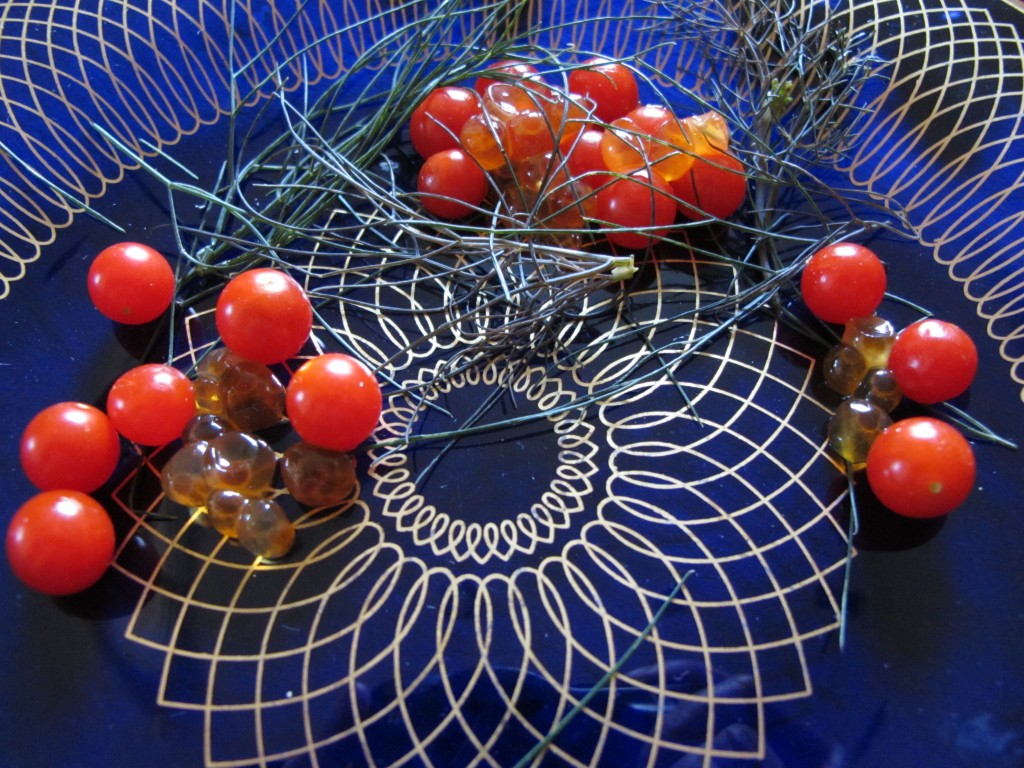 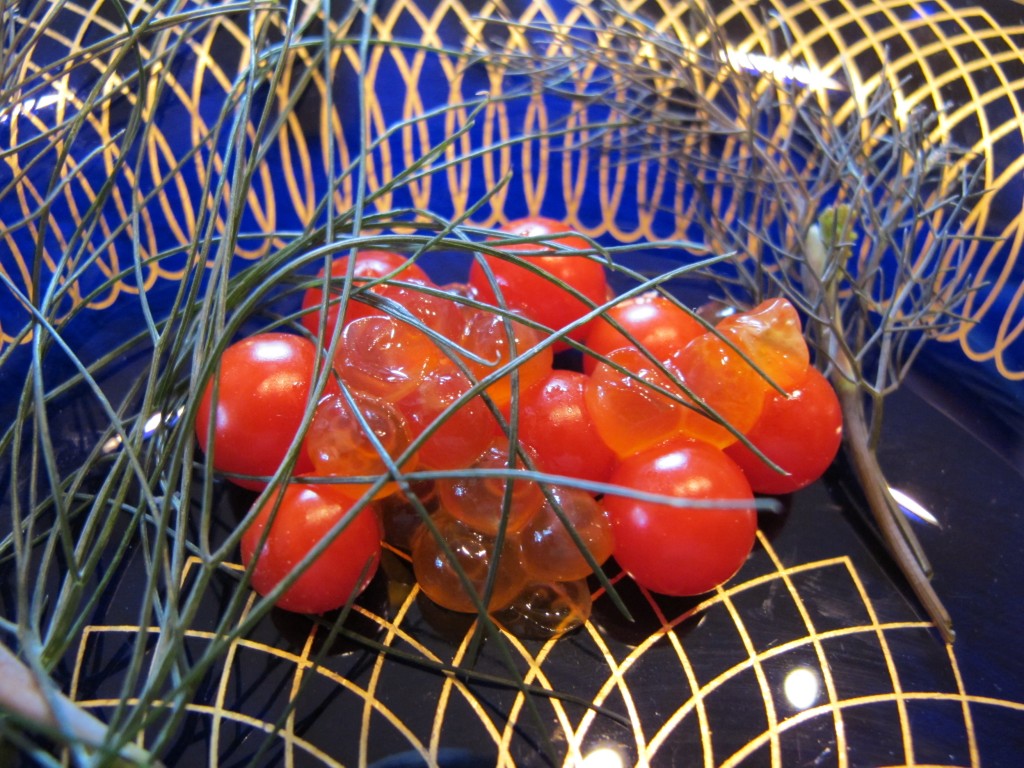 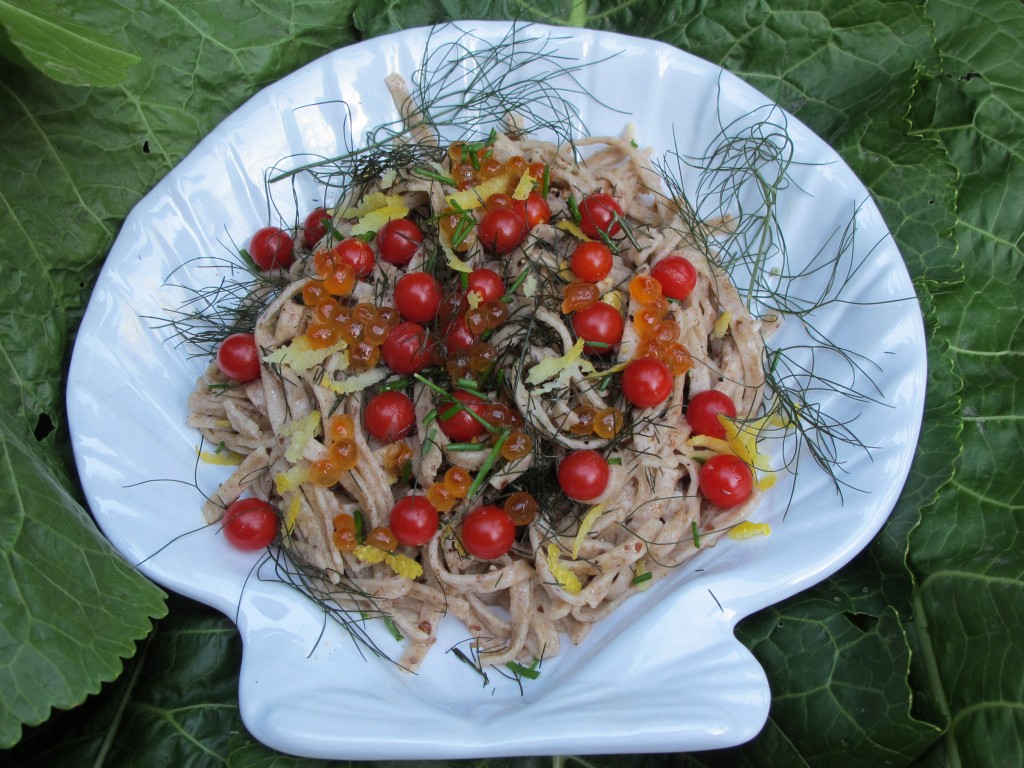 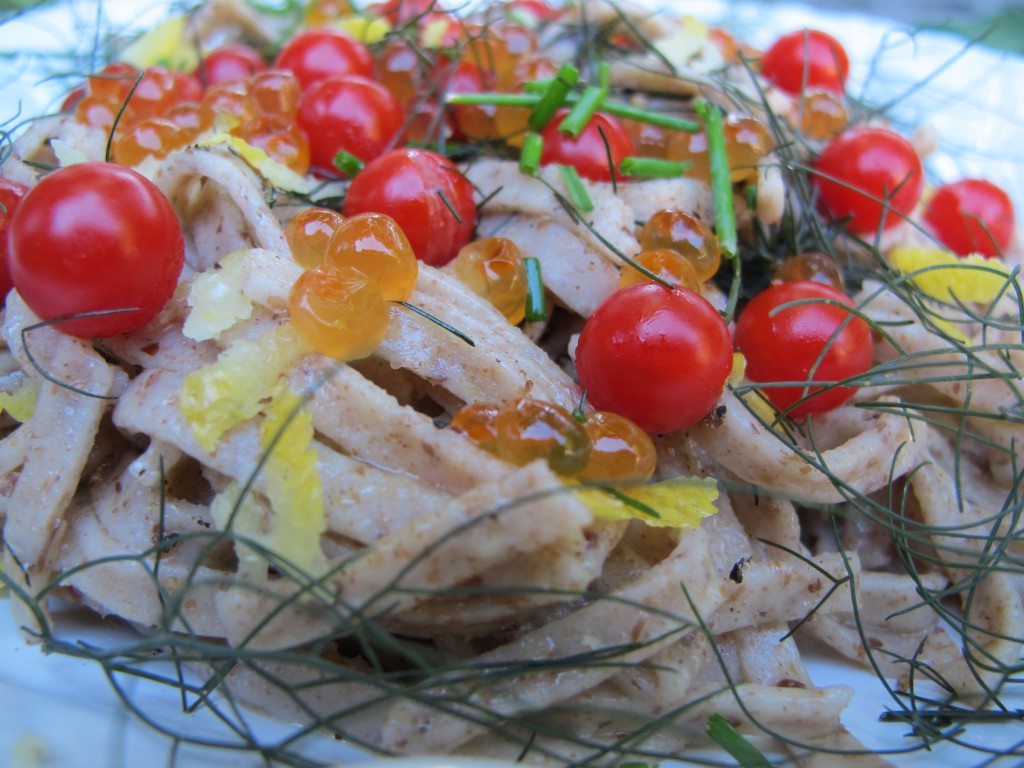 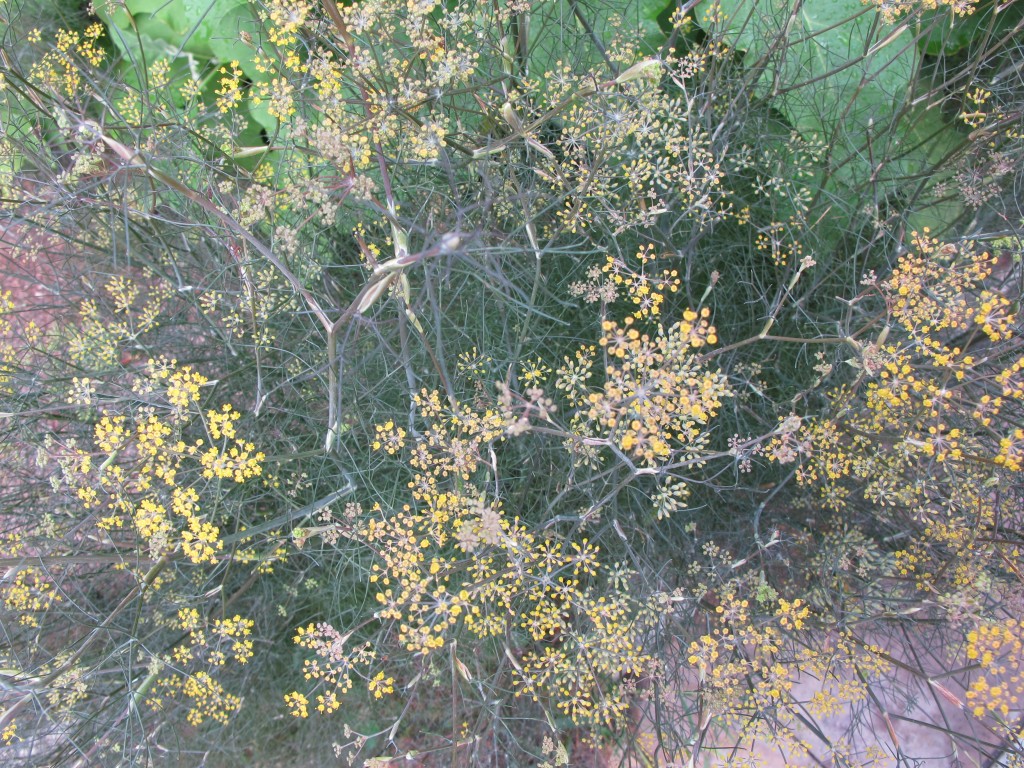