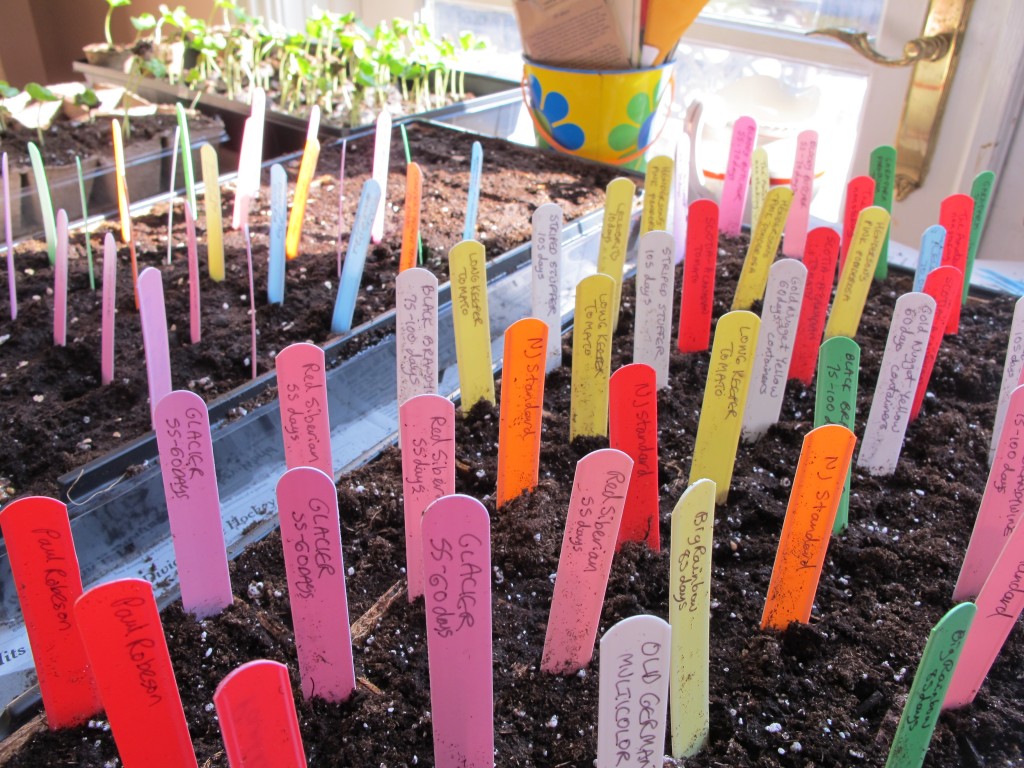 flats of tomatoes, labeled and ready to grow

Last week I had a tomato panic. I found out that Doris Giardino, who grew my beautiful heritage tomato seedlings for my www.124merton.com rooftop garden, was not growing them again this year. What would become of the annual tomato tasting? Realizing that I would have to grow the seedlings myself, I went from window to window in my home placing tables, stools from Zambia, offering platforms from Bali, and whatever else I could find to support and provide enough sunlight for the trays of seedlings I now had to grow myself.

The real panic was, where was I going to find seeds in a hurry? Catalogues are available online but it takes almost 3 weeks for seeds to reach to reach Toronto from the U.S. and by then it would be a little too late to start seedlings. Doris generously agreed to start me off with seeds of some of the favorites of last summer from her dwindling supply. Anna Russian, Paul Robeson, Wapiscon and Speckled Peach and 15 others were found. Alas, one of my personal favorites Giant Belgium would have to wait for next year. New opportunities for different tomatoes were to be found. At” Seedy Sunday,” a community event, I found at least 20 more varieties I wanted to grow. At one booth I found N.J. Standard, a tomato I hope will bring back my tastes of youth spent at Lake Hopatcong, New Jersey. It was there I was introduced to the famous New Jersey Beefsteak and gardening. 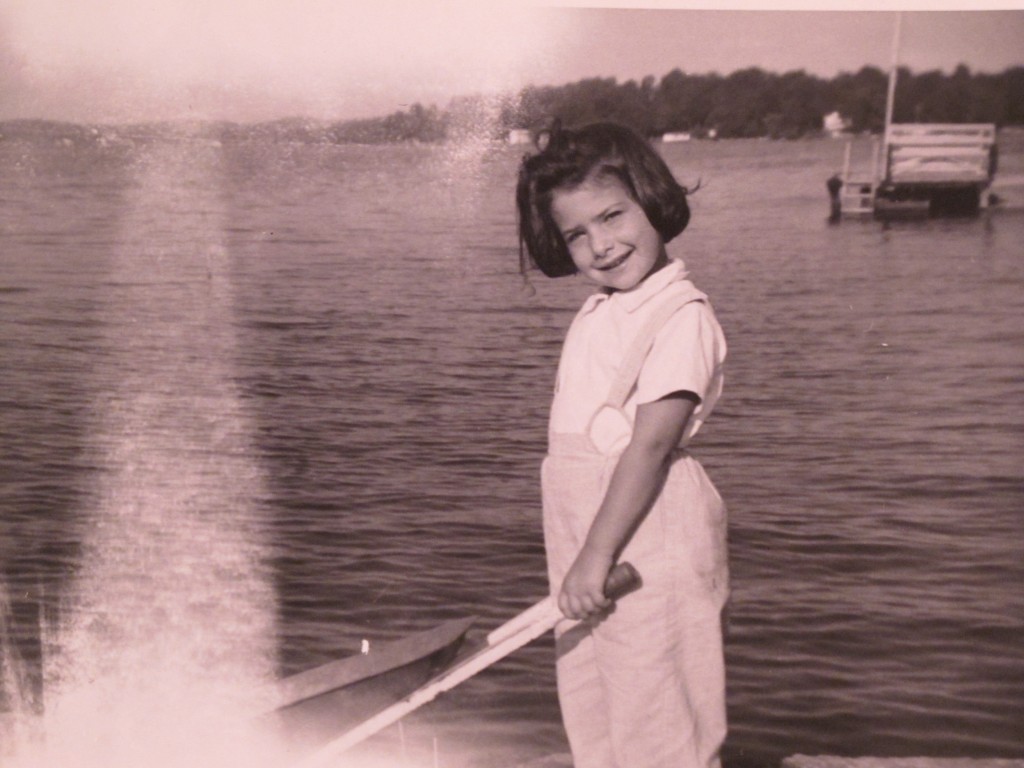 Lake Hopatcong, New Jersey: my wheelbarrow and me, age 4

I pulled out an envelope of seeds that I had bought in Hungary at Tesco [a Walmart-type chain] when we went on a memory tour there in 2005. Would they still be viable and what kind of memories would they invoke if they indeed did grow? [they were viable] I searched through the library of seeds that I keep in 1960’s sand buckets and found some I had grown in previous years. “Red Fig” is a variety that was dried for the winter and used as a fig substitute in the 18th century. When I had previously  grown it in my garden, in no way did it conjure up that sweet taste and slightly gritty texture of dried figs. I was willing to give them another chance. Maybe if I grew and dried them in the sun of the hot roof they would more figlike. Stupice, a heritage tomato I grew with great success, yielded a bountiful crop of round medium size red tomatoes of perfect complexion and taste. Regretfully their seeds were not available to me this year. As substitute,  I bit into a greenhouse “Campari” tomato from Leamington Ontario, and smeared some seeds in the soil in a peat pot. [ they germinated] I also planted a squeeze of seeds of a perfect red black tomato grown in Mexico, the” Kumari.” Before you disparage such a tomato, remember heritage tomatoes were once new varieties and if you have ever tried to grow heirloom black tomato varieties and waited for them to be perfectly vine ripe, only to have them go from almost ripe to bloated mush from one day to the next or crack and mold just as you were whetting your appetite for some, one would realize that perfectly reliable modern tomatoes have their purpose as well. I was wondering if the Kumari’s seeds would germinate as most food products from Mexico are irridated.[they did]

In celebration of the new growing season to come, I decided to use up the last of last year’s bounty of tomatoes in my freezer and shell the beans from the roof that had been drying all winter to make baked beans that would be served in the lobby of 124 Merton for all to enjoy. 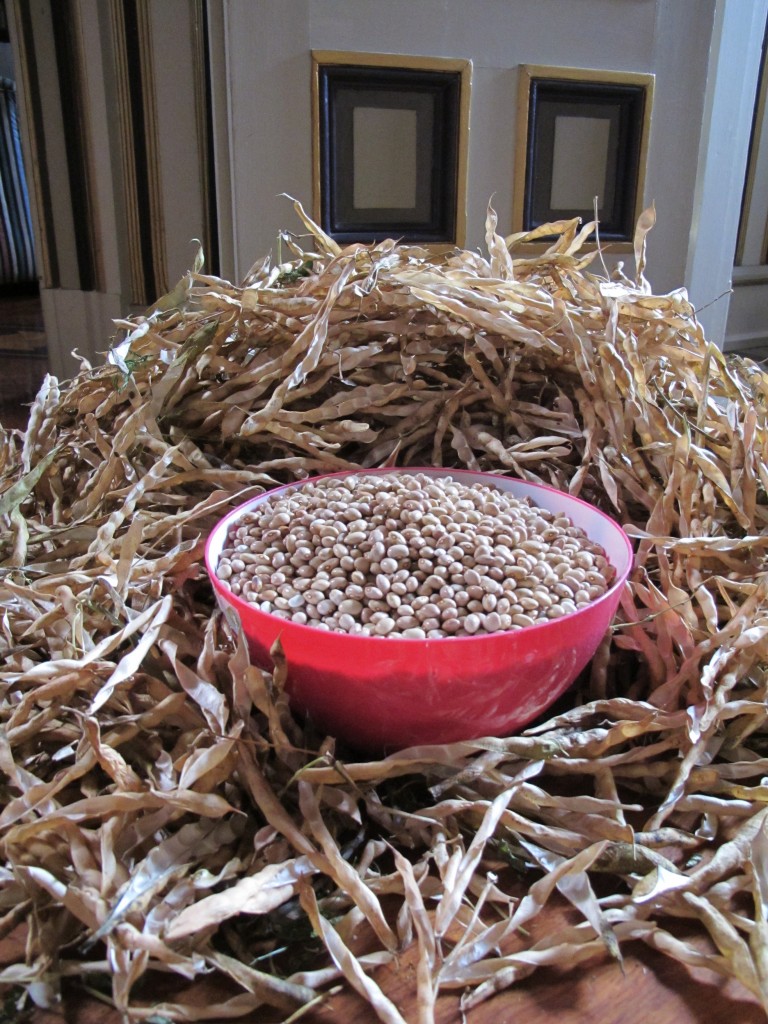 Shelled beans from the roof

14 cups dried beans: that was the total crop of these unidentified variety of beans from the roof. I had grown them the previous year as well and as fresh string beans they where not very delicious. Since there were seeds aplenty as they weren’t consumed raw, I planted them again with the result that there were many more unconsumed pods at the end of this season but the name of the variety was never recorded.

3 cups maple syrup, 3 tsps salt, 4 bay leaves, 3/4 cup ketchup, [ recipe from blog “Let’s play ketchup”] dried rosemary and thyme to taste, 10 cup tomatoes,[ I had pureed them in the blender and then froze them]

My challenge was to use ingredients that came from my home garden and the rooftop garden but feel free to substitute ingredients and quantities. This recipe is only a guideline.

Soak the beans in water to cover overnight. Drain and put all the ingredients in a covered baking pan with boiling water to cover the beans. Bake at 450 F for 20 minutes ,then lower the temperature to 300 F. Bake for approximately 8 hours , occasionally adding more water to cover. The baking time will depend on the variety and dryness of the beans. Keep an eye on them and taste for softness and flavor.When done serve the quantity of this recipe to a crowd.

I had also tried to cook the beans by cooking them on the stove instead of baking them. I found they cooked substantially faster with no loss of taste or texture but of course you can no longer call them baked beans! 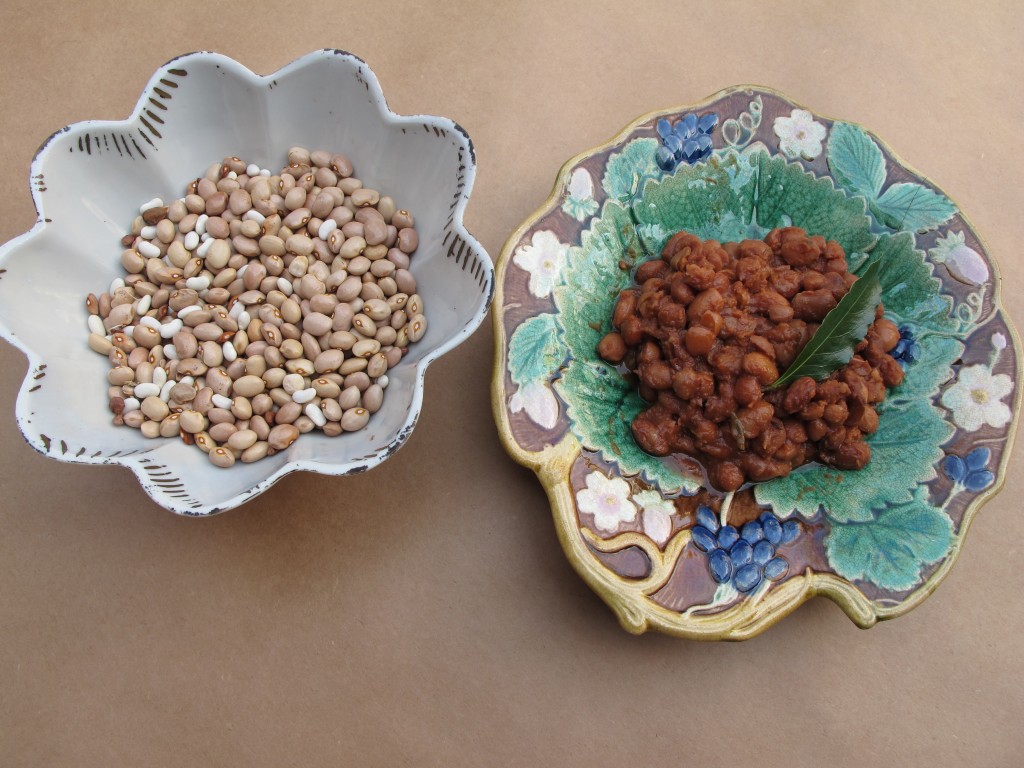