We all do what is takes to find sweetness: Maple; tap into it! 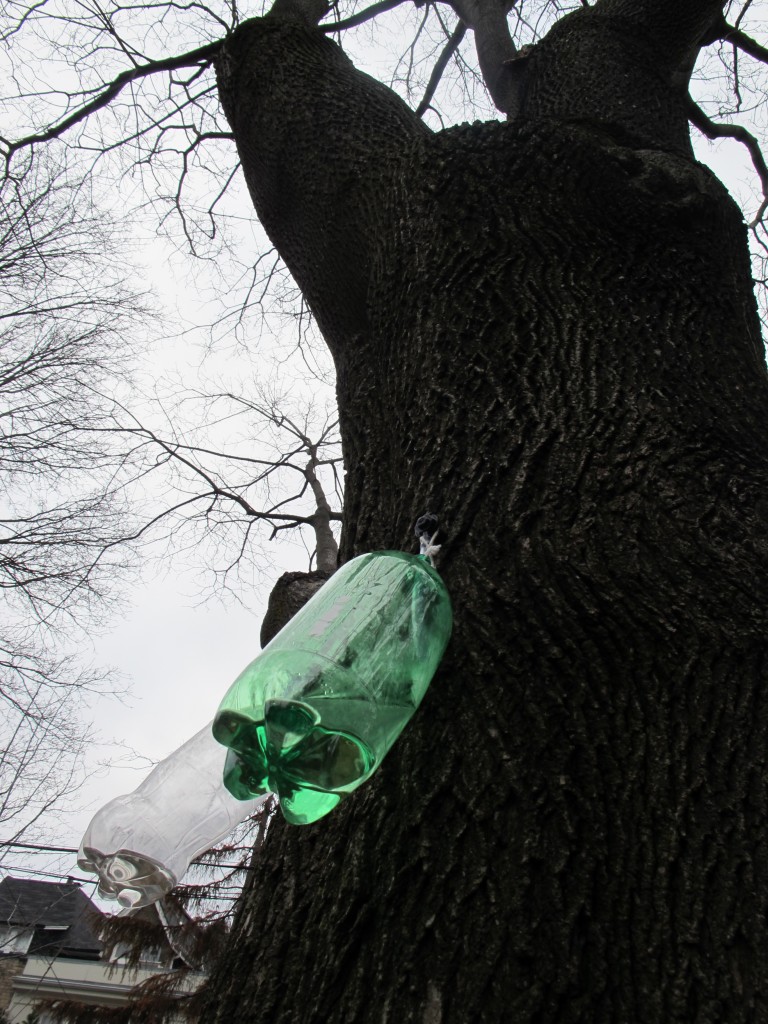 This year I decided to tap the maple tree in my back yard. Truthfully, I was never too fond of the tree. It blocked out the light from the rest of my backyard and however much I pruned it, it regrew in some mathematical equation until it was too huge to be easily trimmed. No plant ever survived under it or in the surrounding area of the tree. For many years I rued, “If only it was a Sugar maple, I could tap it for maple syrup.” And then this year, I found out that Norway maples could also be tapped, the only difference being that you needed 60 liters of sap to be boiled down to  one liter of syrup as opposed to the 40 to 1 of the Sugar maple. People have gone to extremes to obtain the sweet taste of sugar; sailing the seas, colonizing nations, enslaving people, burning fields, clearcutting forests, jungles, planting palms, sorghum, corn, cane, beet, building apiaries and researching chemicals in labs. All this time I had sweetness growing in my own backyard in the disguise of that unloved tree! 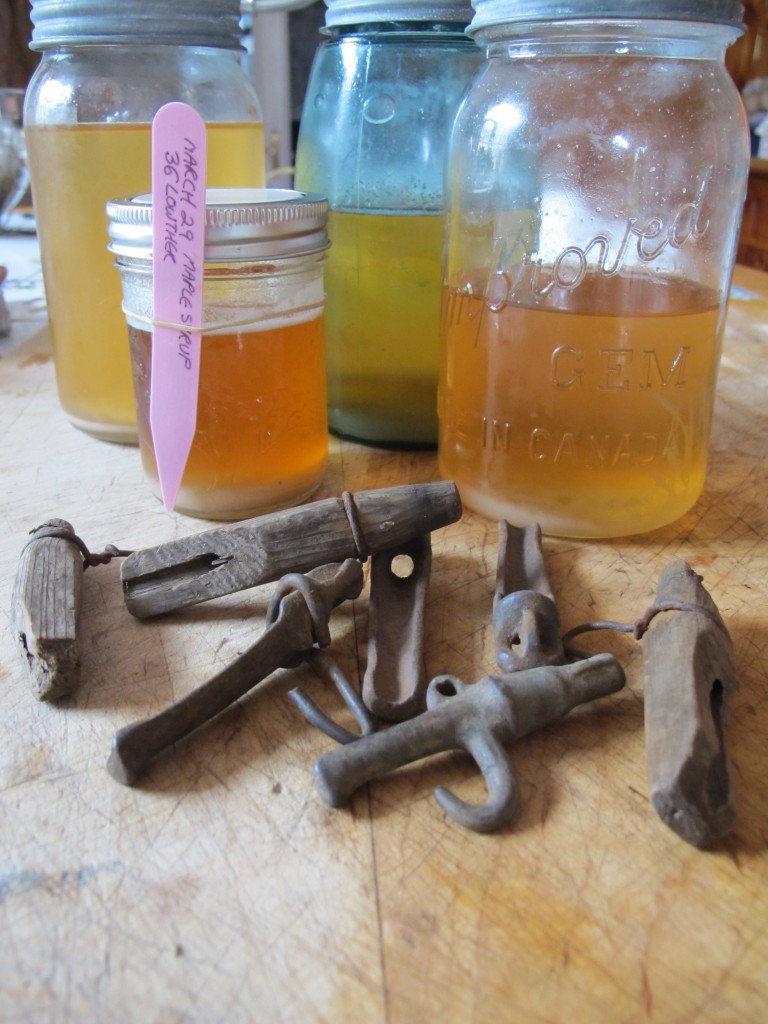 Each day, first thing in the morning, I would go out into the backyard and empty the soda bottle “buckets” of sap to be boiled in the kitchen. Before emptying them, I would stand under the tree and take a large swig of the deliciously cold raw sap. Drinking, I felt myself a tree, the cold sap rising from the ground through my body and up into my veins, the energy of the awakening of Spring made physical.

Nights of freezing temperature and days of Spring-like warmth cause the sap to rise and flow. On March 29th, I gathered 18 liters of sap. It entailed watching the tree all day long so that the sap wouldn’t overflow, collecting it and endlessly boiling it. By now, I was glad I didn’t have a cow to milk because the responsability to milk it would never end. With the tree, I knew that when the first truly warm day would arrive my duties would be over. On the first few warm days without nighttime temperatures below freezing the sap did stop flowing. I will now wait until next year to taste the sweetness of the awakening of Spring from my own tree. 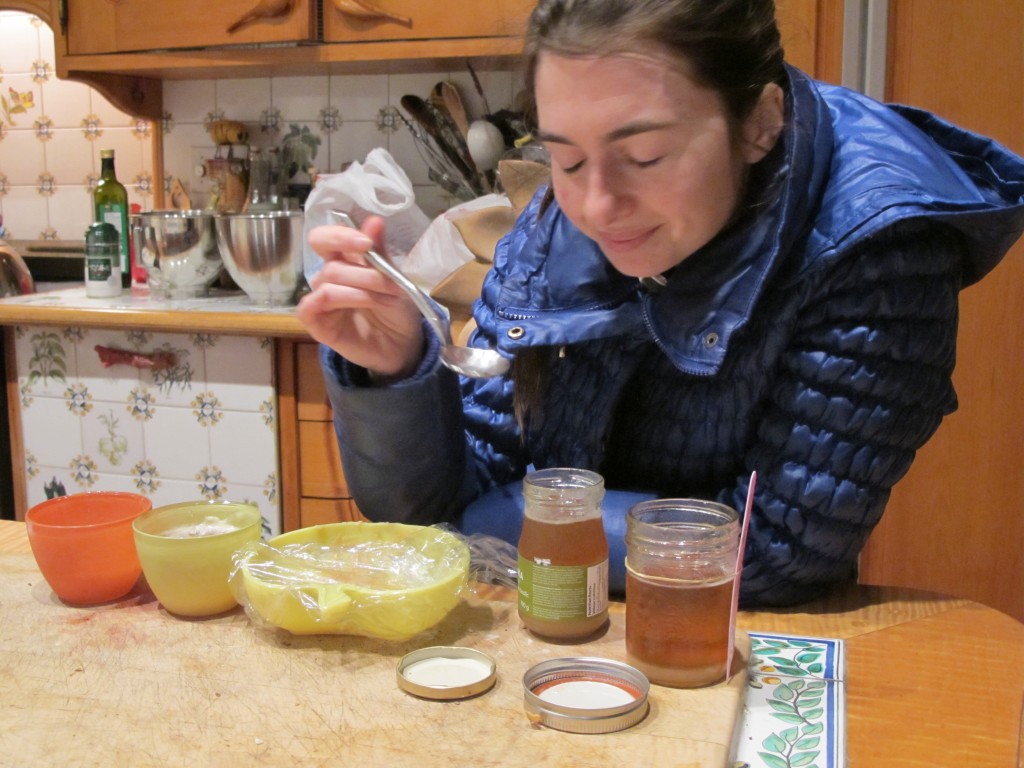 The taste of sweet is a metaphor for the wonderful and celebratory things in life. Birthday cakes are not mere bread but baked and iced confections of sugar, but maple syrup is also wonderful in savory delights.

My first creation from the syrup was ” Maple Vodka.” Put equal quantities of vodka and syrup in a clean mason jar. Cap. In a few weeks the vodka will have shed it’s roughness and blend seamlessly into the maple. Now it will be ready to drink straight or used to marinate salmon for “Gravlax”

Gravlax preparation in the snow

Every year I make gravlax for Passover. I use two huge sides of Canadian Salmon filleted, sprinkling it with sugar, vodka and salt. This year I substituted the maple vodka I had made. Instead of sugar in the dill mustard sauce I sweetened it with maple syrup. I used Icelandic salmon, which was ethereal in texture, and just a small 1 lb. piece for the recipe for the blog. That was a mistake because the gravlax disappeared in a minute, leaving us yearning for more.

Gravlax; The principle is the same no matter how much salmon you use. If  it is 2 sides you can cure them by putting the flesh sides together.

Prepare the glass or porcelain dish by lining it with clean sprigs of fresh dill. Lay the salmon filet in the dish, making sure that the pin bones have been removed, skin side down. This is the proportion for a 1 lb filet. Sprinkle with1 tbs. of salt and 6 tbs. maple vodka. Add more sprigs of dill on top the fish and cover the dish with plastic wrap. Weight the salmon down using a clean brick or any other heavy object and refrigerate. Open occasionally to baste the fish with the liquid that will accumulate in the bottom of the dish and you can also turn the fish flesh side down into the liquid. Do this several times and in about 36 hours the gravlax is ready to eat. It can be kept for several days. How long? I don’t know because however much I make it always is eaten quickly. To serve, remove from the marinade also removing and discarding the dill and slice thinly. Don’t forget the rye bread or matzoh and the mustard dill sauce.

Maple Dill Mustard Sauce: In a blender combine 4 cups roughly chopped dill, with only the thickest parts of the stems  removed, 2 cups flavorless oil, such as canola, 3/4 cup maple syrup and 1 cup Dijon mustard. Blend until all the ingredients are amalgamated and the dill is in 1/8 inch pieces. Refrigerate before and after serving. The sauce will keep for a month 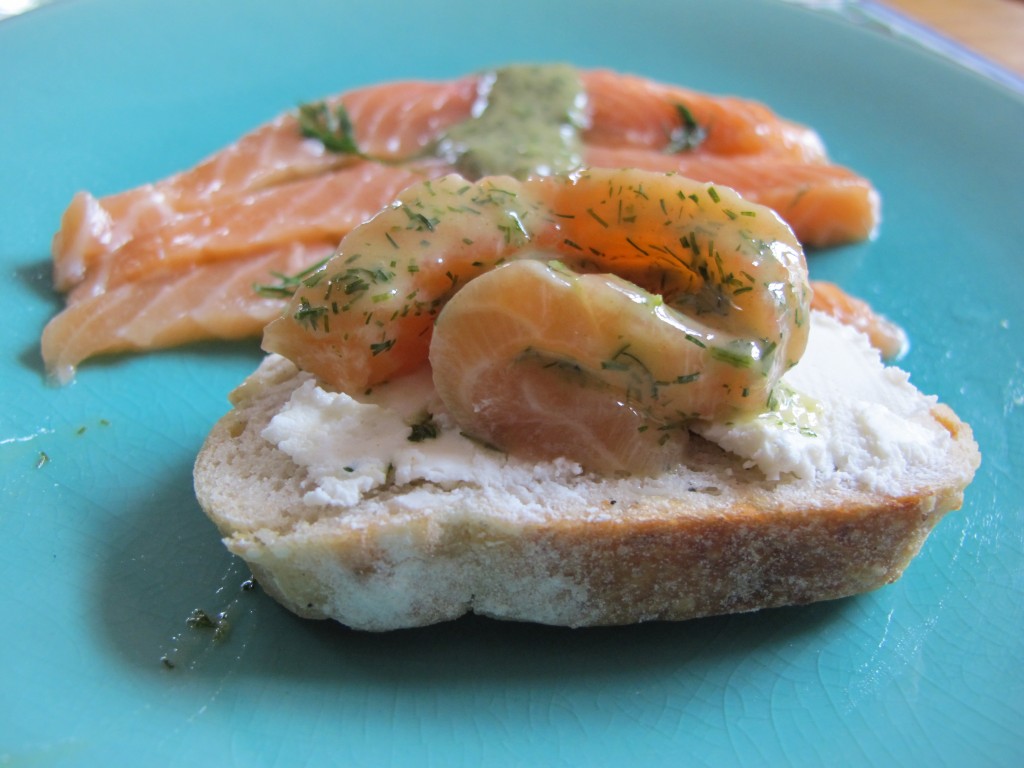 The gravlax is served

This entry was posted in Food. Bookmark the permalink.