Horseradish, of Plague and Pleasure 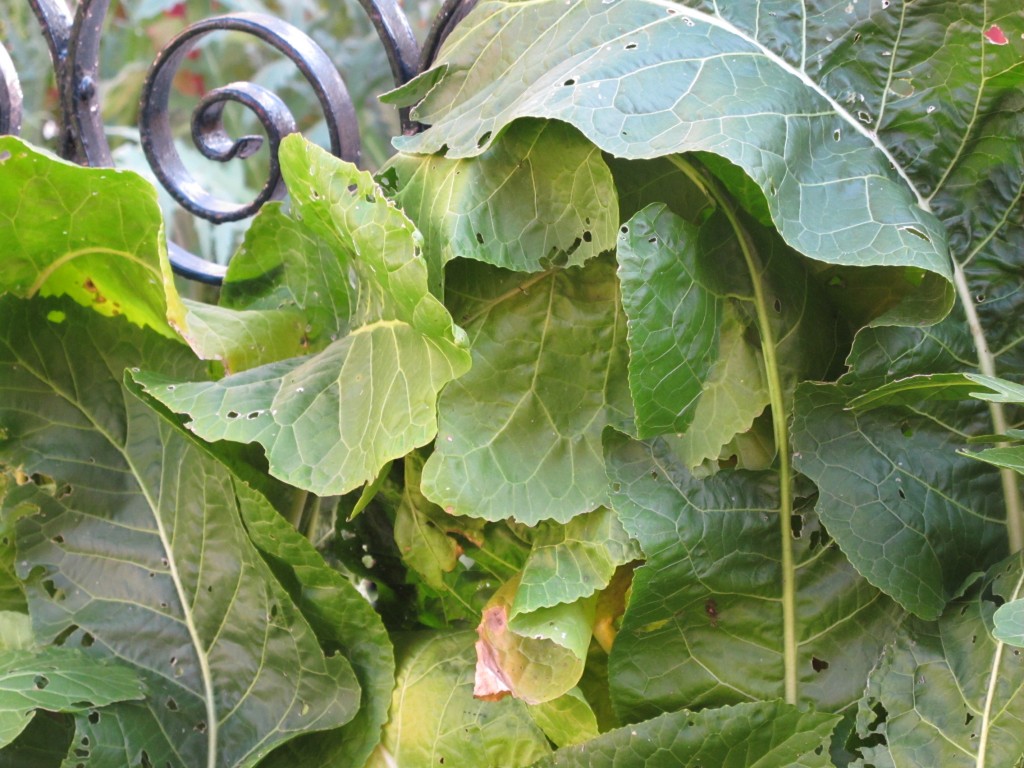 Horseradish leaves in my garden in the Fall

The first  thing we harvest from our garden in the Spring is horseradish for our traditional Passover plate. We dig up the root ,wash and peel it and then don snorkeling gear to grate it. I usually accomplish this with a blender, adding vinegar as needed. Should you become cavalierly curious and stick your head in the blender jar to see how it is proceeding, even the mask and snorkel will not provide protection from its fumes and ensuing pain and tears.

When it is passed around at the Seder, family and  guests seem to take perverse pleasure, as they yelp in pain, of deciding if this year’s batch is hotter than the previous year’s. Many religions like to exploit a mantra  invented by an 80’s aerobics instructor,” No pain, no gain”. Is this the  symbolic meaning of the horseradish; to explain the hardships of  life?  As the meal is served, enthusiasm builds for the grated condiment. “Oh, it’s delicious on the boiled eggs.” “Oh, could we have some more for the gravlax and the gefilte fish?”  “Is there any more left to put on the matzoh balls?”  Can it be that something that was initially painful has morphed into something delicious and pleasurable?
Back in the garden, if you dig up the horseradish, each little cut of its ever expanding root system provides a brand new plant of architecturally gorgeous leaves, until there is no room for anything else!
Several years ago, I had had enough. I excavated the garden to a depth of 4 feet  and put in new soil. It yielded a garden of beautiful soft fertile soil and guess what? A little bit of horseradish! Could the hidden meaning be that like horseradish, we are tenacious, even in the face of eradication?
I think the real message of horseradish at the Passover table is,  ” Never plant horseradish in your garden.It becomes the eleventh plague!” 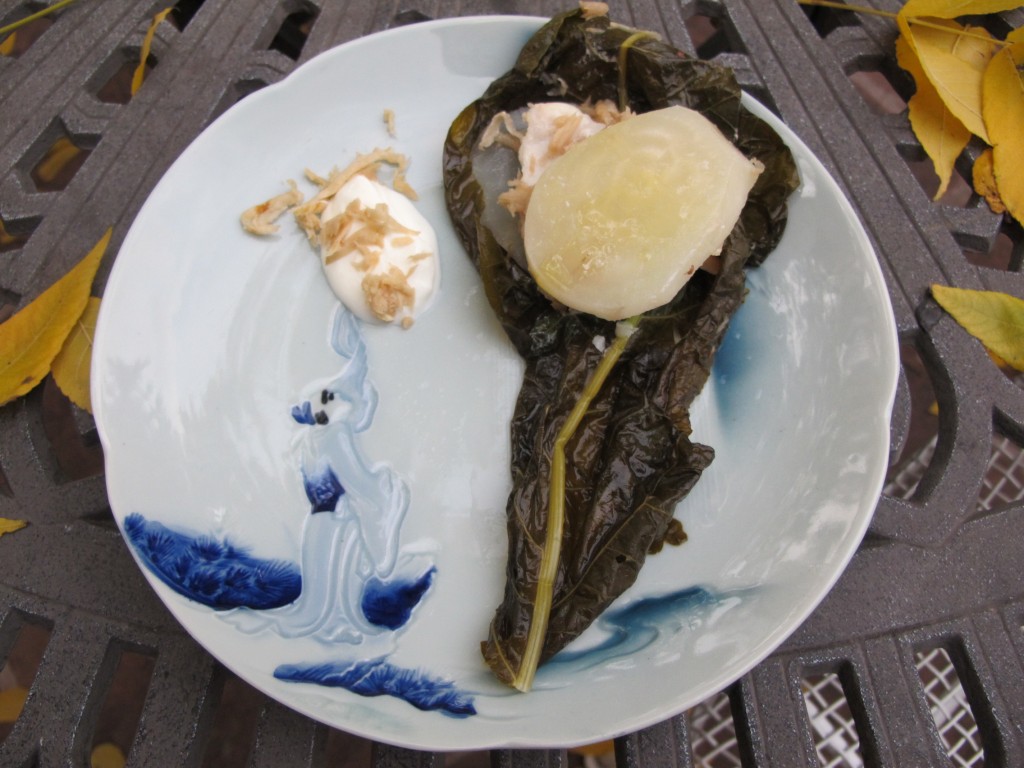 When several years ago when I was about to dig up the garden to eradicate the horseradish, Susur Lee http://www.susur.com/lee/ came by.

As I was lamenting the bounty, he suggested that he would try steaming and wrapping the leaves. I promised I would put them aside for him when I was about to dig the whole thing up. I put several large black plastic bags aside for him in the garage when that time came. Before calling Susur, I asked my men ,”Where are the leaves?” ” Oh, those things? We threw them out!” Thus I missed my chance to provide fodder for the gustatory imagination of one of the world’s best chefs.

This Autunm, I was thinking that the time had come to curtail the growth of the horseradish again, so I had no reservations about digging and poking around the roots.Thus inspired by the idea of steaming the leaves, my original recipe was born. 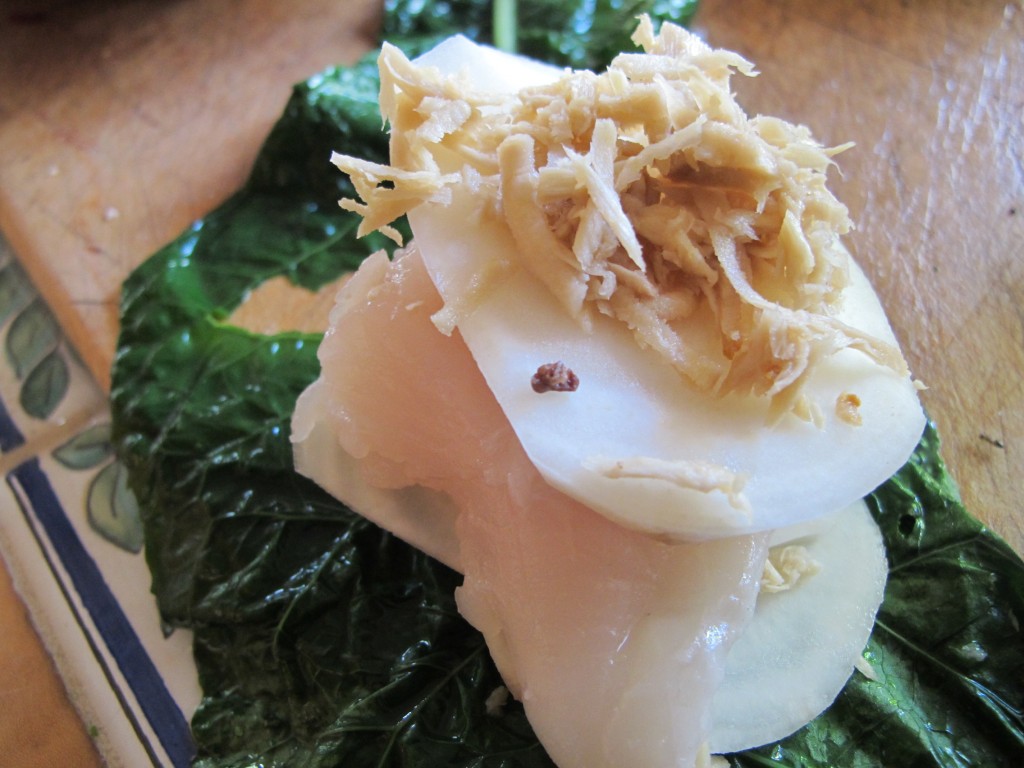 The layers before steaming

For each serving you will need : 1 horseradish leaf , a 3″ x 3″ square of halibut, several slices of “Albino”beet, and grated horseradish root.

Briefly steam the leaf until pliable. When the leaf has cooled spread it out and make layers of beet, fish , root, beet, root. Fold the sides of the leaf around the package and then complete the wrapping by rolling the package from leaf end to end. Place about an inch of Riesling wine in a small sauce pan. Bring to a simmer and then gently place the package in the wine. Cover and gently simmer for about 20 minutes. 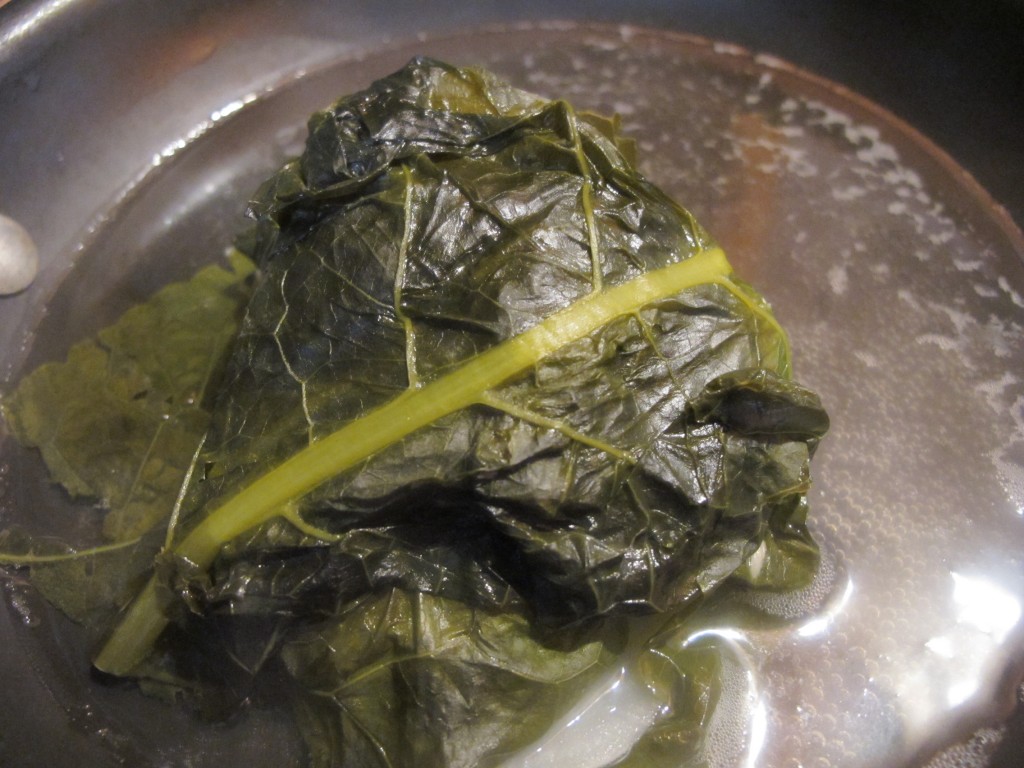 To serve, unwrap the package on the plate it is to be served on. Open and drizzle a little olive oil on the exposed beet and serve with a dollop of sour cream topped with a bit of grated horseradish. 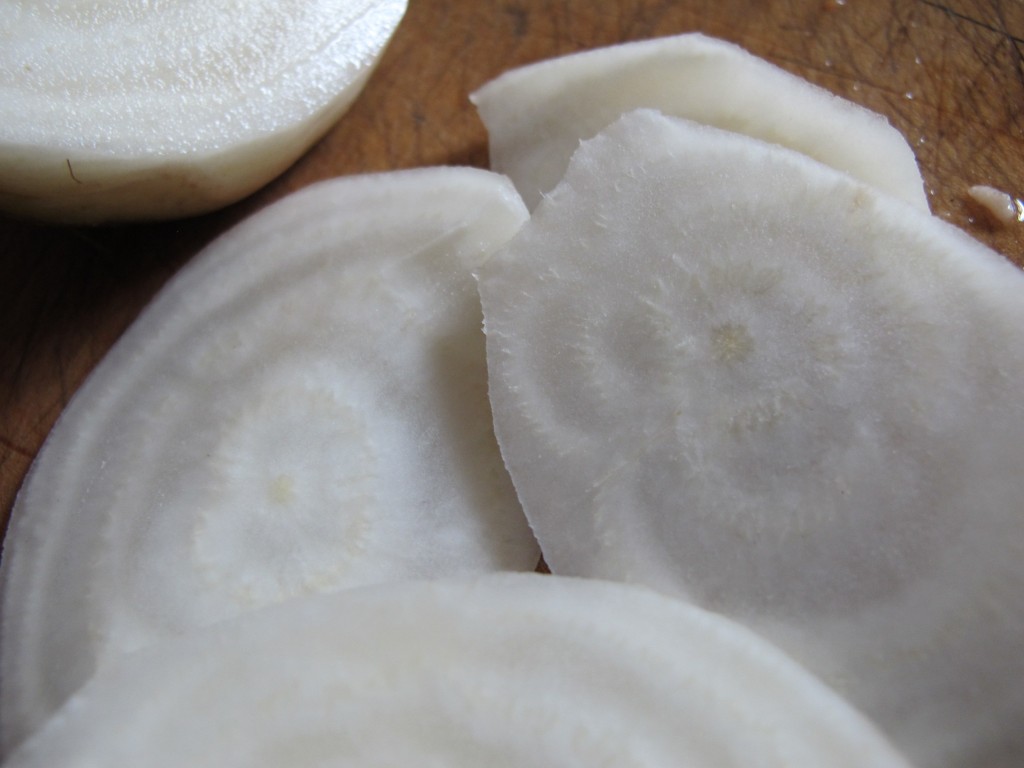 Beautiful "Albino" beets from my garden

I served it to my husband and ran to do some errands. When I came back I asked him how he liked it. He said that it was over the top delicious except he wasn’t crazy about the Japanese tasting thing. The leaf ! I had meant it as a flavoring and to keep the fish moist . I have eaten the flowers of the horseradish and  munched on the raw leaves and now we know that dependant on the degree of exoticism you enjoy in your foods that the steamed leaves can be delicious too! 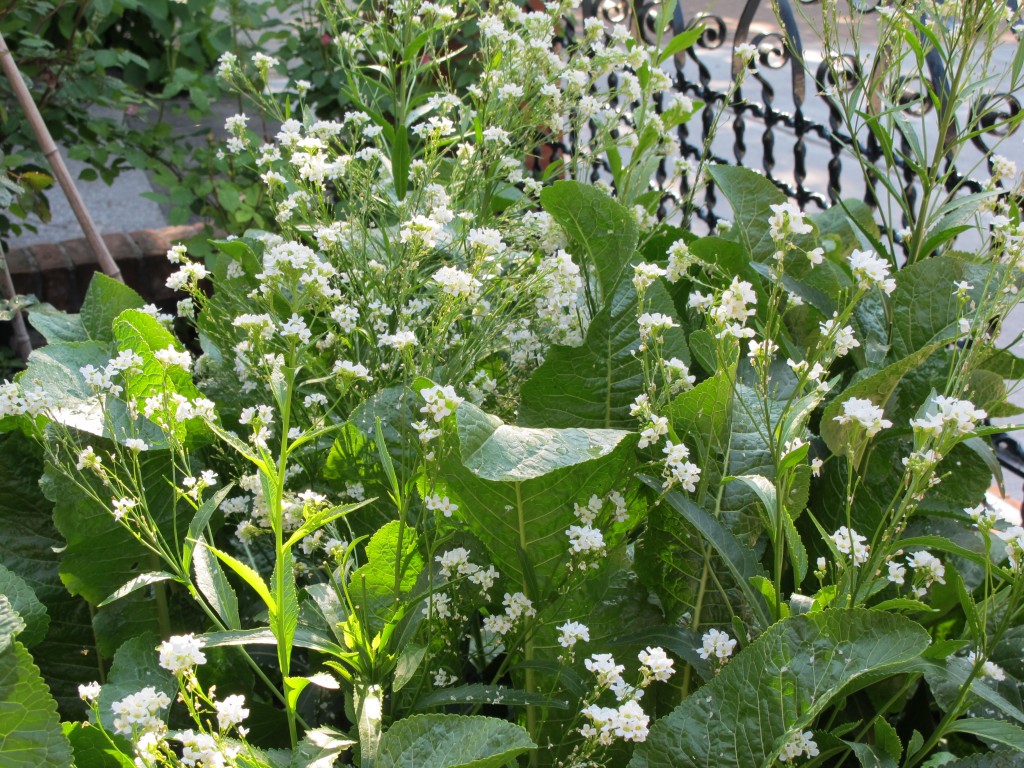